With the rise of DSLRs people have been recording sound and video separately so that the clapperboard became fashionable again. However, this makes it virtually impossible to view rushes and do a rough edit overnight.

To be able to have a rough edit every morning we recorded the sound both in camera and on a separate sound recorder. That has the huge advantage that rushes can instantly be checked and we did every night rough edits which was only possible because we had the sound in place.
In 99% of the cases we used the in camera sound in the final edit. Only a few times the external recording was used. Mainly when the audio was very faint or had a high dynamic range. The external recorder ran at 24bits/sample against the 16bits/sample in camera which allowed recording at higher dynamic range externally.

This was the simple setup which allowed Mat to watch/control the mic sensitivity via the TASCM recorder so that at the camera nothing had to be changed: 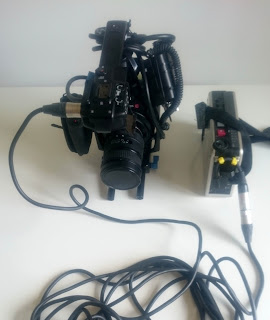 We used the line out of the recorder and set the camera gain to line in. This TASCAM recorder didn't have an XLR out but a simple RCA to XLR adapter did the trick: 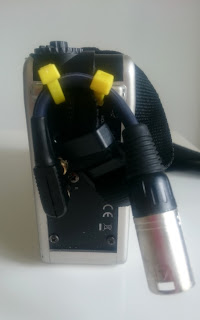 GND -> XLR pins 1+3 and the signal to XLR pin 2 which gives a semi balanced signal which produces perfect results at line out levels.

We still used a clapperboard! 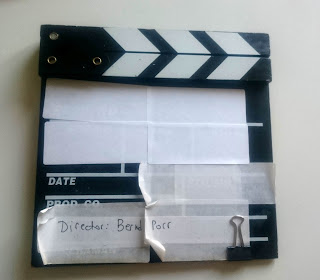 Just in case we needed the external recording from the TASCAM recorder.
However, to save time we just said the take number and clapped it off camera. So, no nose of any actor got chopped off. ;)