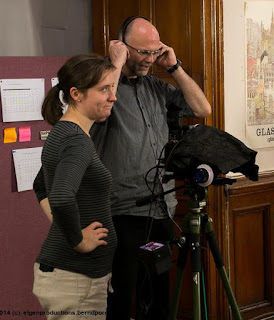 I've been a shooting director on Anna Unbound. This means I was DOP and director at the same time. In Glasgow I worked with Jessica McDermott in a team (see above!) and in Athens with Alex Kapidakis as ACs. Usually I operated the camera and the AC did focus pull. However on a 12hr shift we also swapped and changed roles.

This of course takes away the attention from the acting. However on a low budget film shooting is done on a tight schedule where changes can rarely be done during the shoot. In order to have time with the actors I did an extended rehearsal weekend from Friday till Monday one week before the shoot started with no technology there. Just the actors, the AD and myself. We hired a community centre for that purpose and we rehearsed all scenes without any camera / lighting equipment around. Other companies do table reads but we went straight into the action and had enormous fun. Especially the more improvised scenes (pub, team building exercise) benefited from this kind of rehearsal.

Meeting up with the cast also allows to get to know each other. It takes away the initial fear of the first couple of takes on the actual shoot. We had certainly enormous fun during the relearsals.
Posted by Bernd Porr at 21:30