Screenwriting: from the treatment to the script

There are many ways of developing a script but for me it is roughly in three/four stages. First, there is a general idea which can be described in one paragraph. Then I develop a first draft of a treatment which I then give it to a writer who then turns it into a 1st draft and then we do as many iterations as required together.
The initial idea of Anna Unbound dates back to a practise run for the Glasgow 48hr film challenge for which I wrote a short horror treatment. This then turned into the short "Cut Free".

The film got selected for the Shockerfest film festival which encouraged me to develop it into a feature film script. With loads of feedback from Molly Illffe and Nic Motte this turned into a first treatment by the end of 2013. I entered it into a competition but it wasn't selected. This was a disappointment but at the same time I was glad because a production company might have cast somebody else instead of Vasso who I always had in mind playing the lead. Now I had my control back. Then, in Spring 2014 I went to Granada/Spain to lock myself in for two weeks and further improved the treatment. Vasso provided further input after my return which lead to the final treatment. Then I handed it over to Martin Brocklebank who wrote the first draft of the script. We then did numerous iterations till the summer until we arrived at the final script.You see that the treatment completly lacks the last part of the film which emerged through the collaboration with Martin. This is what I like about collaborations in that they lead to much more than one person could have imagined. 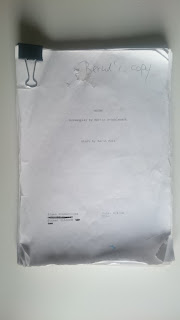