This is Jess, the AC for Anna Unbound here, briefly taking over the reins to speak a little bit about focus pulling and, while I have you, the overall production value of the film. If you've been following this blog or other articles about Anna Unbound, you will know that this a micro-budget film. Pulling off a feature on this budget is no mean feat, especially given that everyone was paid! But what really sets it apart is the quality of production.

Bernd and I have worked together on many short films and he is incredibly knowledgeable about cameras and lighting rigs. He has built tracks, dollies, can quickly wrangle up a cable, the list goes on. But this technical wizardry meant that we could replicate shots and movement that you would see in high-budget films. Although, unlike high-budget movies we had a pretty small team and a lot more we had to achieve each day. And so, this meant we had to try and get far more into each shot. And in order to do this and give Anna Unbound an edge, Bernd divised these long shots, with lots of variety within them to also maintain the pace. And that's where I was required as a focus puller. We always shot the film with a shallow depth of field, which gave the film a cinematic quality and a consistency from start to finish, although it also meant a lot of focal points. So, I had to develop my own personal code. 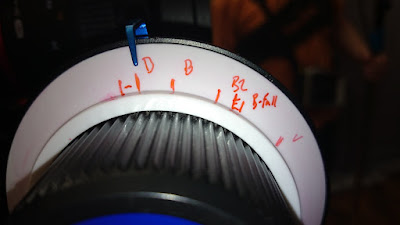 The focus ring was my main tool. This seemingly chaotic series of letters, numbers and dashes corresponded to where each of the actors were in the scene, when we pulled to them. And it only made sense to me, in that moment. Now, I can make out that Vasso and Bill were in the scene and where it ended ('E'), but that's about it. However, due to the way we were making the film, we had time to block in the shots and I would be very aware of the actors movement and where Bernd, on camera, would be going next.

While I'm giving you an insight into the shots and camera work, I'll quickly tell you about my work on steadi-cam on Anna Unbound as well. We did a few key shots off the dolly or without a tripod. One in particular required everyone in our team to work together at once. It is a crucial scene in the film, so I won't give away too much that happens in it. But it's another example of Bernd's adventurous nature with shots and keenness to add production value to the film. In the lengthiest shot of the film, Bernd and I switch roles mid-shot. I'm in a stead-cam harness with an arm and pulley above my head and we move from the camera on the dolly to being strapped onto me, while some of the most intense action of the film is playing out in front of us. From there I have to chase the lead actor, Vasso and go freestyle on the focussing. All the while, the rest of our team were rearranging the set before they were seen back on camera, as part of the same shot. When you watch the film, see if you can spot this shot. It was certainly quite an adrenaline rush getting it.
Posted by Unknown at 16:48