Organising the edit: from logging, over digtial transfer to the timeline

In this post I describe our approach how the footage went from the camera to the editing program. The software we used was Premiere CC 2014.
The approach was the following. 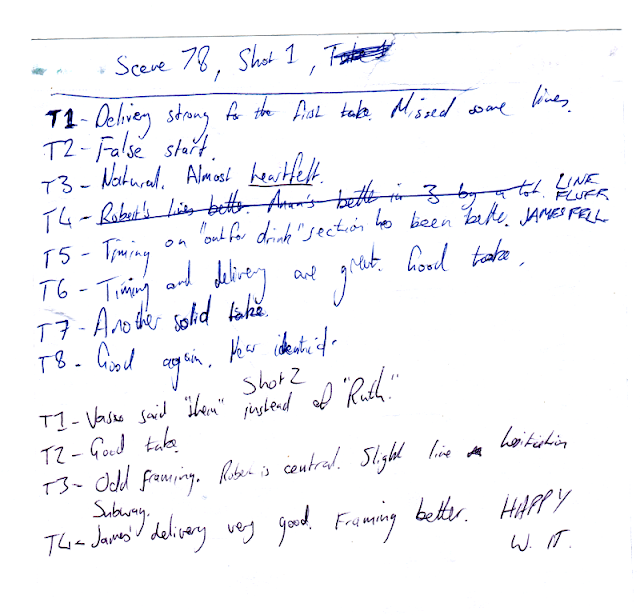 Every sheet had the scene on top of it and then we organised it according to setups (called here shots). In the example above it's setup #1 with 8 takes (CU on James/Robert) and then setup #2 (CU on Vasso/Anna). Logging was done by Nicholas (our 1st AD) and or by our 2nd/3rd AD. Before every take Nicholas would say "Scene #, shot #, take #". Remember that we recorded sound in camera so that we didn't need write anything on the clapper board but used the sound to identify the takes. This again saved time during the shoot.

The camera was a Panasonic AF101 where we recorded externally on SSD with the help of an Atomos Samurai which also acted as the monitor for Jess (AC). The internal SD recorder acted as a backup. We used two 128GB SSDs which can store more than enough footage for one day. The Samurai allows to name the files according to the scenes/takes etc but we didn't use that feature.

On location: every scene becomes a separate premiere file

Reinis, our assistant editor and DIT then took the files off the SSDs. For every scene he created separate premiere files, for example, scene_78.pproj (see above) which contained all takes of scene 78  -- plus the backup audio from the external recorder and the backup video from the SD card. He then would watch all takes and added to the comment section the setup and take number. The ticks indicate the best takes (which might have changed later when I re-watched it).
The assistant editor then would give me every night a hard drive with all the ProRes files and audio files.

These files were copied into subdirectories: for every day there was one subdirectory and then again sub-sub-directories for the SSDs. Remember we had usually two full SSDs/day (one for morning and one for afternoon/evening) so that we arrived at a structure of for example:
/25Sept/1/ = 25th Sept, morning session
/25Sept/2/ = 25th Sept, afternoon session
/26Sept/1/ = 26th Sept, morning session
....
These media files would then be copied on the main editing computer every night. Usually Reinis would keep a copy of the media files on his laptop to make a rough edit overnight.

Directly after the shoot the assistant editor would then do a rough edit overnight. Every scene was edited in those separate premiere project files and then e-mailed to me in the morning for review to decide what needed to be reshot.
The rough edits were done without caring much about the sound transitions, channel allocations (usually boom+radio mike) and just in stereo (not 5.1). Still this allowed us to check both video and audio for technical glitches and to be sure we had everything we needed. 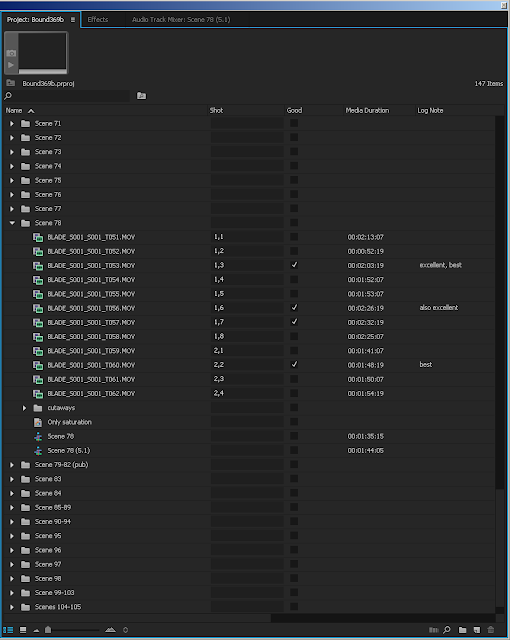 This is a fantastic feature of Premiere that one can include individual project files into one main project. These included project files then become bins in the main project. In the example above "Scene 78" was the premiere project file scene_78.prproj created on set and overnight. This was then imported into the master project as "Scene 78". In this screenshot there are two sequences for scene 78 where "Scene 78" within the bin is the overnight rough edit and "Scene 78 (5.1)" is the final edit of the scene in 5.1 (which was done much later).

Remember that every bin now contains one scene. See the example above it's "Scene 78 (5.1)". This contains now the sequence of scene 78 in 5.1 audio:

The whole film was then created by putting these separate sequences onto the main timeline: 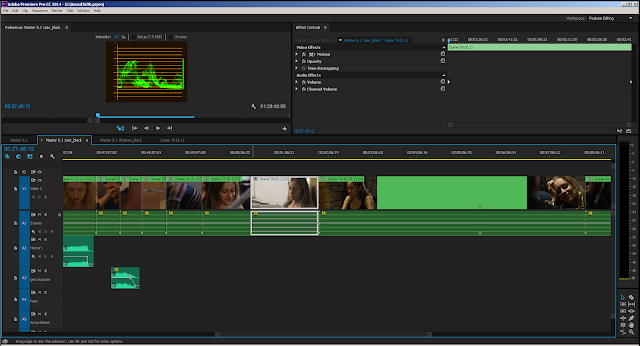 Backups were done every night onto a DX115 carrier. The same used for digital cinema. These carriers are super robust and easy to get on ebay/amazon.