I show you how the main office was lit for the day- and night-time scenes.

This is the lighting plan of the main office: 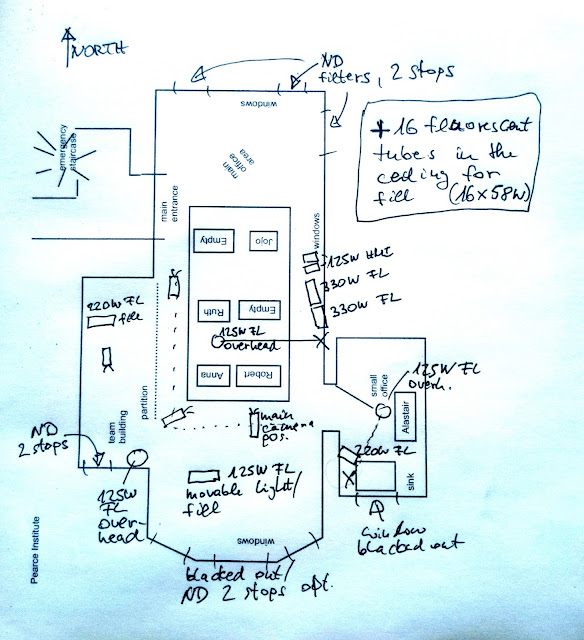 The key light is established by two 330W Kino-flo-like lights and one 125W HMI.
They are placed in a way that they are always slightly behind the actors or at a steep angle. 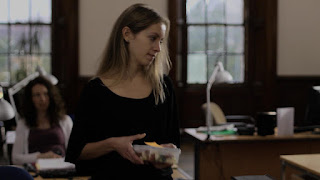 The key is lighting up Vasso's hair on the right and we see it on her forehead on the right. Similar in the background on Sharon.

In terms of fill the approach was to use the house lights fitted in the ceiling. There were 16 fluorescent tubes of 58W. These were all about 10 years old and had terrible colour rendering. The fill would have looked green on camera. I decided to replace them with high CRI tubes from Osram which exactly match the tubes in the kino-flo-like fluorescent lights: Osram T8 L 58W/954 Lumilux DE LUXE Daylight G13. They have an impressive CRI of over 95%, match daylight colour temperature so that it feels as if it's just daylight coming through the windows. 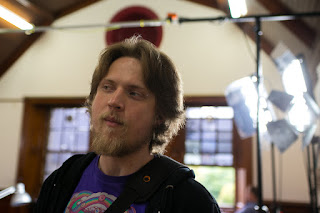 In the photo above we see the key lights on the right (2x 330W fluorescent bank and one HMI) and the fill lights in the ceiling (and Reinis, our editor who heroically did the overnight edits of all the rushes!).

In addition we had one 110W fluorescent light as a mobile fill to shine light into the eye of the actors and which was more or less next to the camera. This can be seen on this photo (now looking from the other side of the the room) right at the back to the right. Again, the fluorescent tubes for the fill are visible at the top and the HMI on the left here. 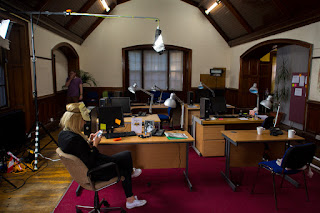 What is also visible here is the boom arm of the 125W light which was used for the night time lighting to have an overhead light.

For night time the fluorescent tubes in the ceiling were off. The look was created by the key lights as in the daytime scenario, the overhead light and the desk lamps. These played an important part here which acted as the fill. Most of the time this was the bounce off the table as can be seen here: 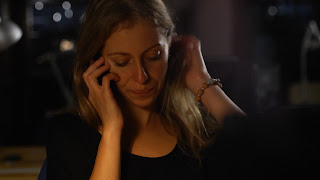 The desk lamps had normal tungsten bulbs fitted, operated via dimmers and had a 1/2 CTB in them to make it look warm (camera white balance was always on the fluorescent lights).

For the horror part of the film the desk lamps turned into the key lights with no further fill from the front. 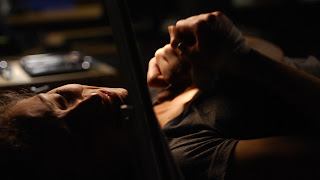 Both, Vasso and the instruments in the background were lit by the desk lamps. They have been moved behind Vasso so that we get a high contrast look not giving away too much. We cheated a bit with the desk lamp at the back with a full CTB to make the instruments look more clinical.